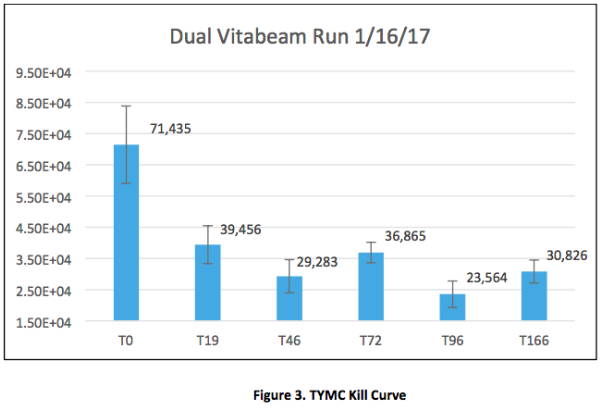 Figure 3 demonstrates the amount of TYMC, or yeast and mold, that were eliminated on each sample

In the lab test, conducted in January 2017, we wanted to determine the strip's ability to eliminate yeast and mold on previously failed samples. To achieve this, two strips were set approximately six inches apart. Cannabis samples, previously determined to be highly infected with yeasts and molds, were recultured and placed about sixteen inches below the strips on a stainless-steel table surrounded by protective sheets. The samples were tested at 0, 19, 46, 72, 96, and 166 hours. Samples were then plated on 3M PetriFilms and incubated for a minimum of 60 hours. The results showed a reduction in yeasts and molds after 166 hours. Discover our lab testing results here.

For our second study, conducted March 2017 through May 2017, we did our first in-field test and treated six strains of cannabis with the PXW strip through a ten week flower and cure cycle. Yeast and mold on the plants decreased below detection and eliminated the need for herbicide treatment. The research followed these plants from their late vegetation through the curing process.

Initially, the PXW light strips were suspended 18-22 inches above the crop and followed a rotation cycle, exposing the plants to twelve hours of light and twelve hours of rest. During that time, colonization of yeast and mold communities slowly increased, typical of cannabis grows as well as other plant life cycles.

​We witnessed a slight increase in TYM during weeks five and six so we immediately took samples. This increase made the grower concerned that the lights weren't working and instead of waiting for the lab results, we agreed to allow the grower to spray the portion of the grow that was being treated under the lights out of his concern for being able to flush the product properly.

​As an extra precaution, the lights were lowered to a height of 6 to 8 inches and the strips were left on for 24 hours. These changes had an immediate effect, dropping the rising TYM counts to mostly none detected.

​When results came back, it turned out that the levels of TYM from before he sprayed were non detectible, proving the lights' had been effective in remediation.

Herbicides and fungicides are used to kill unwanted growth in plants — like bacteria, fungal pathogens, and powdery mildew. Herbicide treatments attempt to eliminate those target areas while leaving the cannabis plant relatively unharmed. Some of those treatments, however, can interfere with the plant growth and introduce additional, unwanted hormones. If not flushed properly, toxin residue can lead to failed samples and expensive crop loss. Even after passing state testing, the consumer still ingests these questionable substances on the plant.

​The lab found that treatment of the PXW strips are comparable to the standard industry practice of fungicide treatments for remediation of TYM.

"Importantly, there are no deleterious effects of PXW strip treatment on cannabis chemotype (potency and terpenes) as compared to control strains," PhytaTech reported.

​The first in-field test was successful in eliminating TYM counts, but after witnessing a spike in bacterial growth between weeks five and six, we decided to try again. The purpose of this was to test the strips against normal grow conditions at increasing light intensities -- meaning we increased the number of lights in each grow section and had six to eight lights per 32 square feet and tested three strains. We also wanted to conduct a clean test in which absolutely no sprays were used on the test sample. In doing so, we were able to prove the PXW strips eliminate pathogen growth faster than it can reproduce. The second in-field test was conducted from May 2017 to July 2017.

By increasing the density of coverage from four to six lights per grow area, TYM was completely eradicated on the crop.

​"In the state of Colorado, 10,000 ctu/g is the failing level. These levels were never seen during the study. Results on the effects of chemotype testing are in Table 3.

​Not only did we remove fungicide from the grow, but we did so without negatively impacting the terpenes and cannabinoids. It's like the plant didn't even know we were there.

The light strip is designed to complement your grow lights and work synergistically within your existing grow operation. We recognize each grow operation is unique so we want to work with your team to design the best combination of the number of strips and the installation configuration needed to create optimal performance. It's most beneficial to provide protection in the vegetation and flowering stages, but PXW strips are most effective when used in every stage, from clone to cure℠

Simply put, if the light emitting from the PXW strip can reach the plant, it will destroy the pathogens. Each PXW strip is designed to cover an approximately 8 sq ft area and protect four to six plants. The strip comes equipped with a hanging mechanism, enabling you to easily tailor the recommended hanging height of 18 to 22 inches to your specific coverage needs.